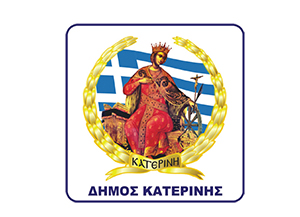 The Municipality of Katerini lies on the Pierian plain, between Mt. Olympus and the Thermaikos Gulf, at an altitude of 14 m. The Municipality has a population of about 100,000. It is near the city of Thessaloniki, Greeceʼs second largest city, which has been beneficial for Kateriniʼs development over recent years. Katerini is accessible from the main Thessaloniki–Athens highway GR-1/E75 (with two interchanges near the city) and the Egnatia Odos to the north. It is served by both Intercity and local trains on the main railway line from Athens to Thessaloniki and there is a comprehensive regional and national bus service with its hub in the town.

A popular tourist destination in northern Greece, the city of Katerini is close to the sea (6 km) and to several archaeological sites of great interest such as the ancient city of Dion (5th century BC, 17 km away) and the Castle of Platamon. The beaches of Korinos, Paralia and Olympiaki Akti are visited by both Greek and international tourists during the summer. The base of Mount Olympus and the town of Litochoro, are at a distance of around 20 kilometres from the centre of Katerini.